An exhibition of new works by Sebastian Black 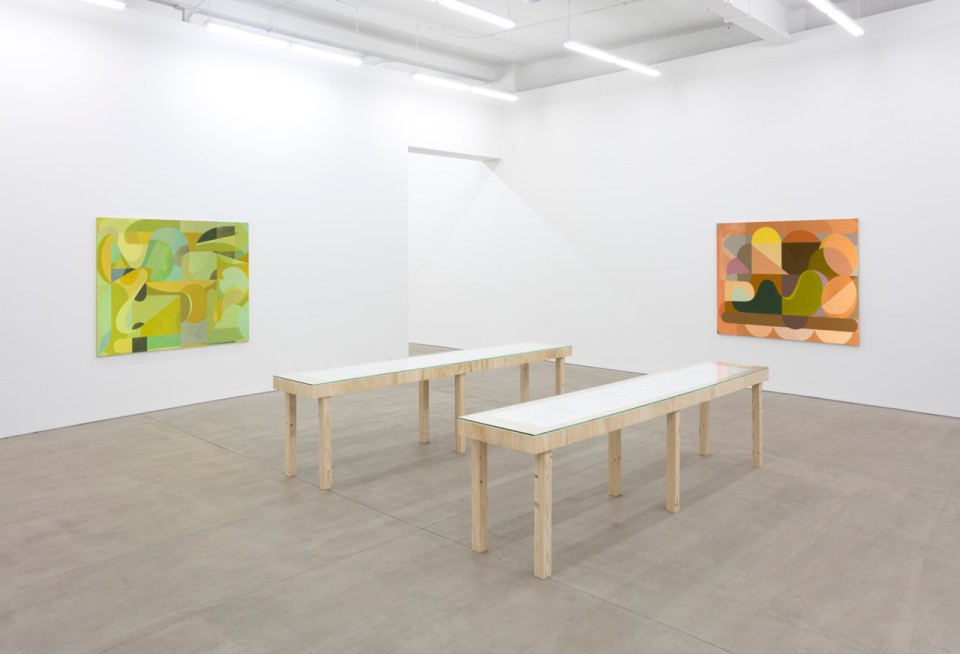 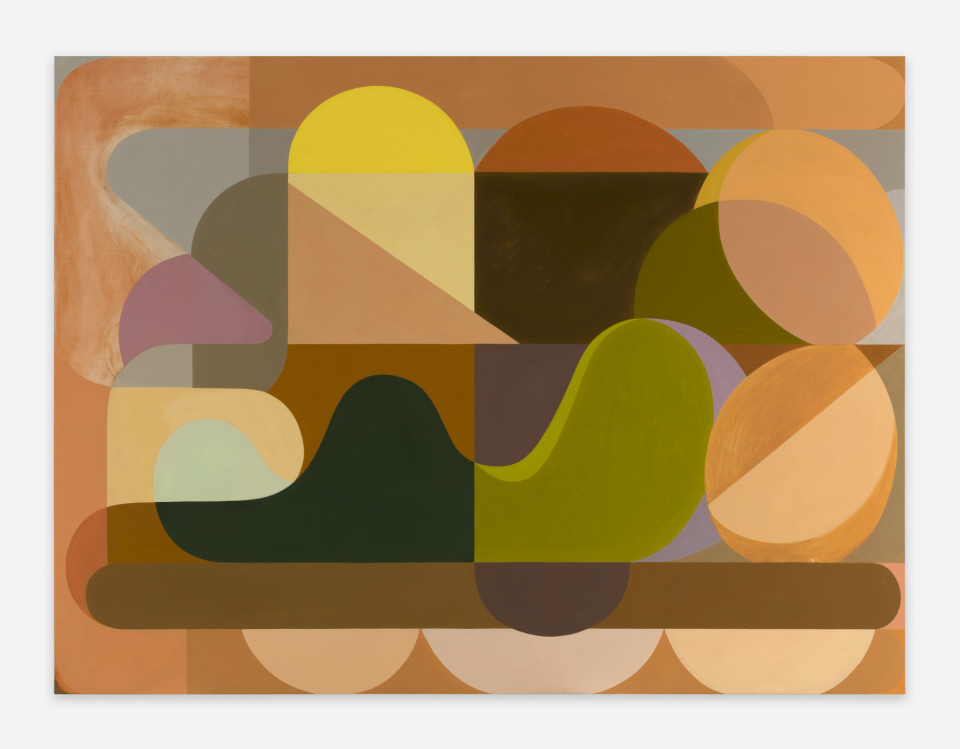 My friend’s mom died. Her best features were her big round head and her skinny little legs (nose, mouth).
Also she wore her hair in two fat grey braids like a chieftain (ears).
Besides that though her world was all dust and debris (muzzle, whiskers).
When my friend died he was buried next to her. Lichen grew all over their headstones (eyes, pupils).
Too bad her name is still legible. Oh Melissa! You hang around around like a bad party guest,
like a perfect circle (head) in the imagination of a maniac.,
2015, oil on linen, 63 x 84 inches (160 x 213.4 cm) 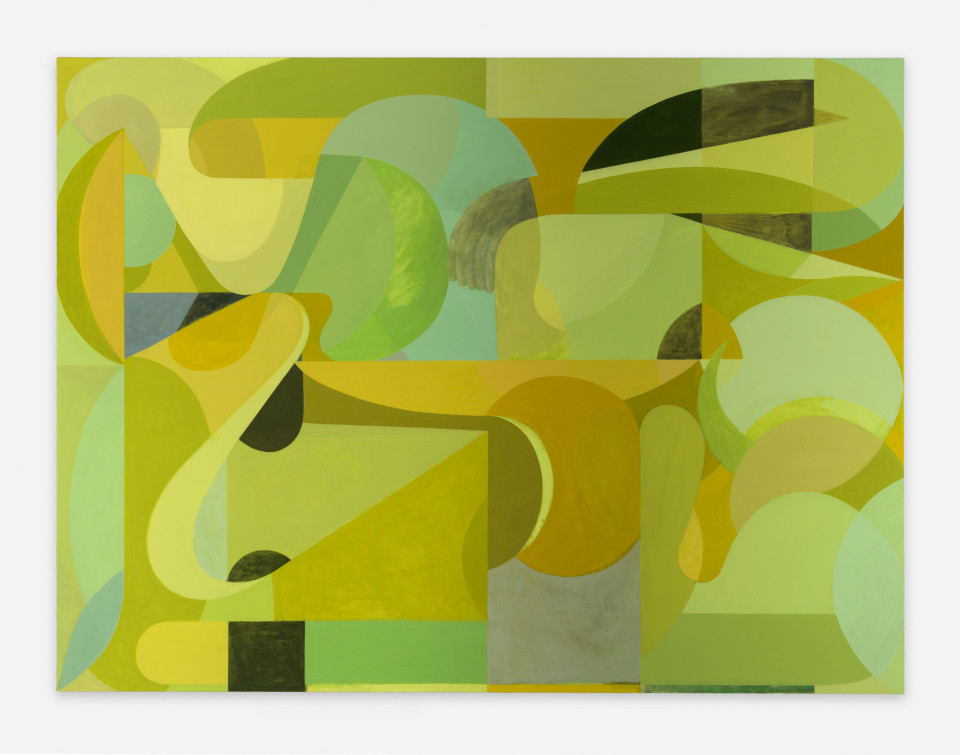 I believe that when civilization comes to an end and mother earth (head) finally shaves us off
it’s rats who are gonna pick up the sticks (whiskers) and begin again.
I believe it. I seen their language smudged ankle height on loading docks and pharmacy windows,
at the feet of triumphal arches (eyes, pupils) etc. “What the hell are these shapes”?
I always think, stooping down to rat-read them with my nose.
But I always to lose my balance! That’s when I feel the absence of my tail (ear),
echoing (ear) off the august Tuckahoe Marble.
Coming back around to strike me while I’m sat down here writing, trying to ignore a fried egg (muzzle, nose).
It has a hair on it anyway (mouth)., 2015, oil on linen, 63 x 84 inches (160 x 213.4 cm) 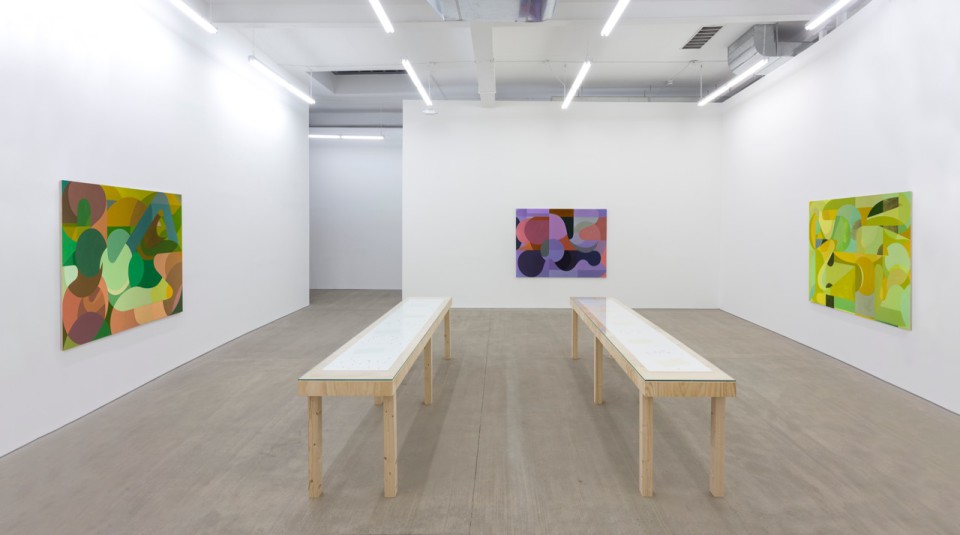 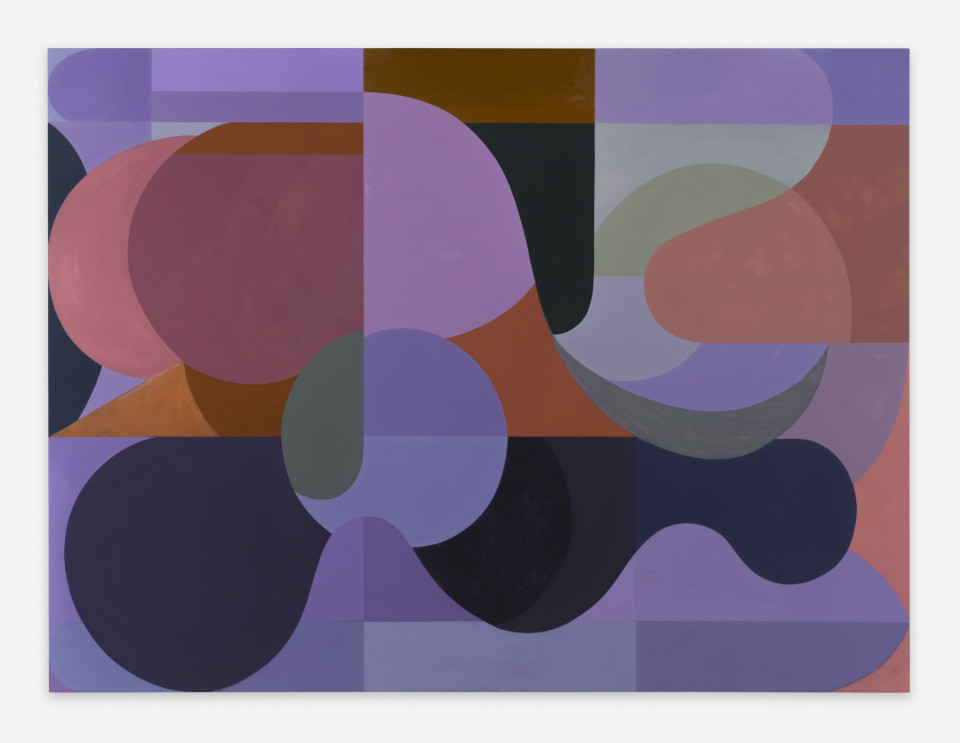 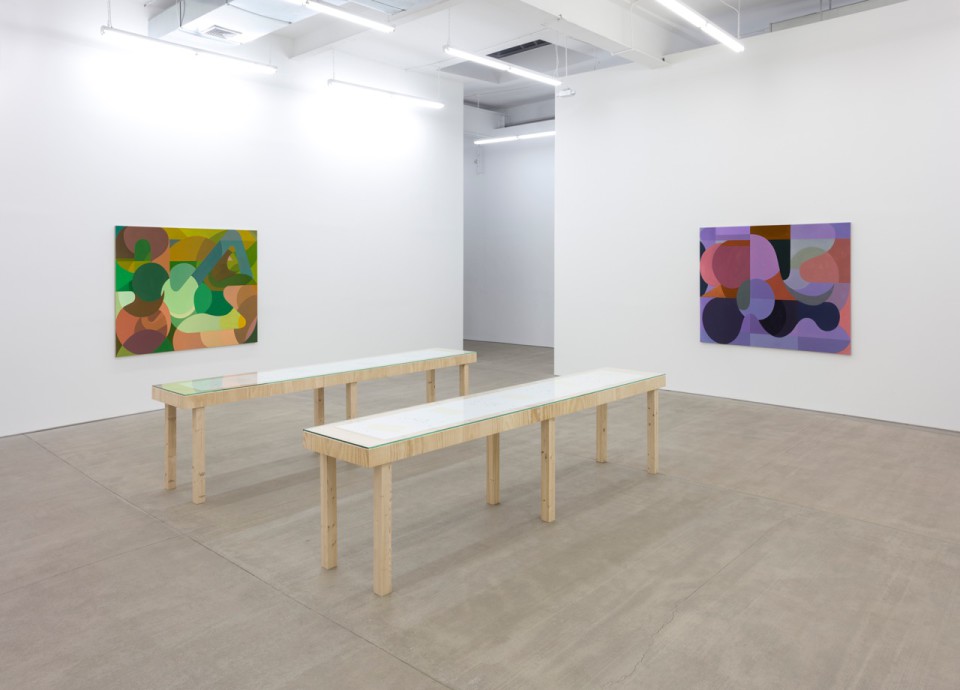 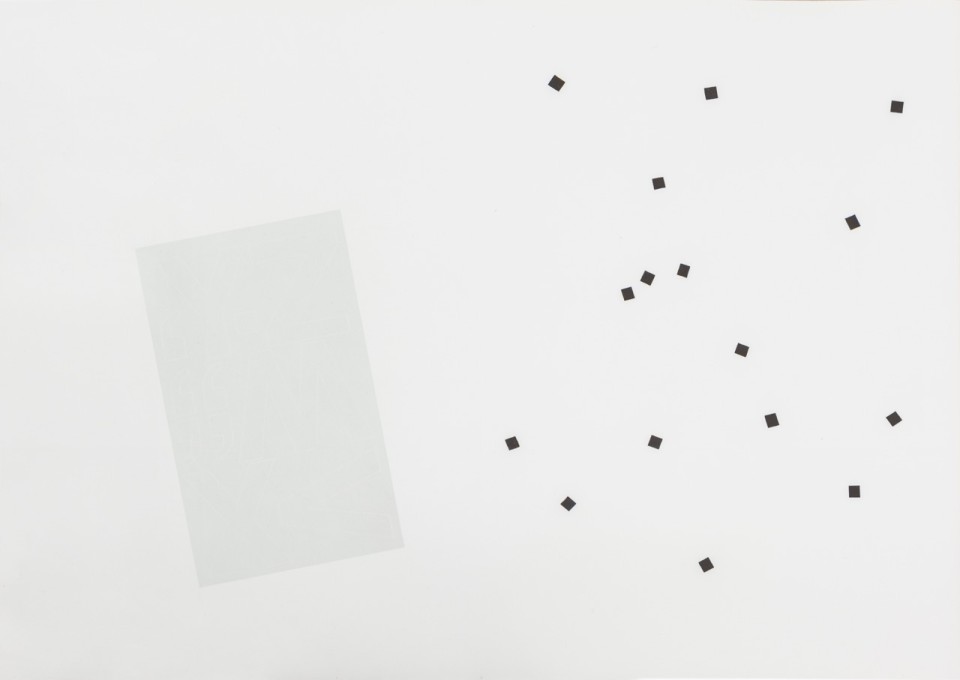 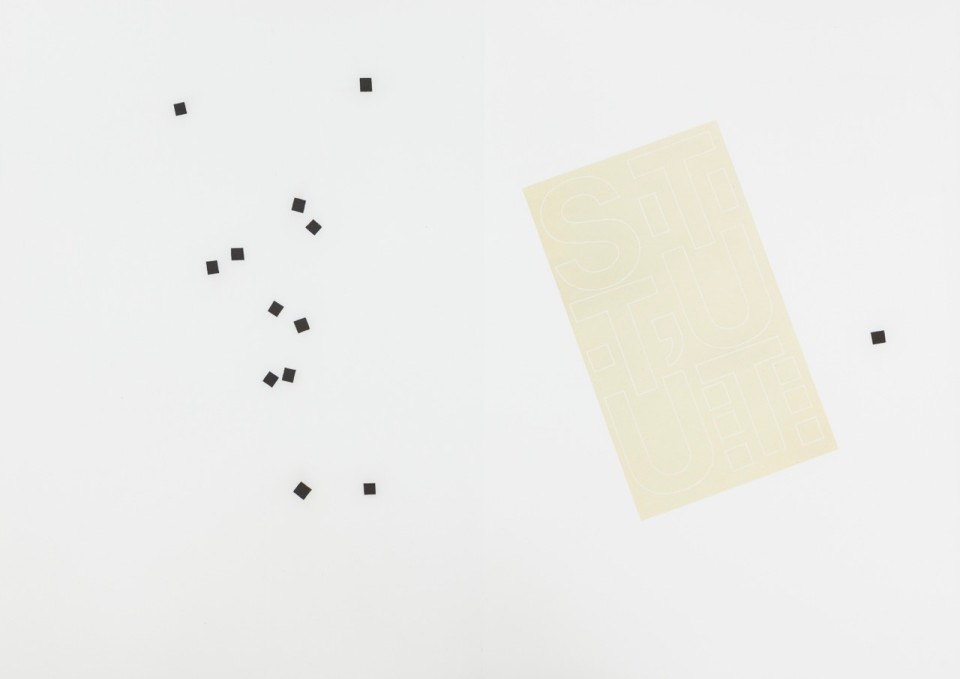 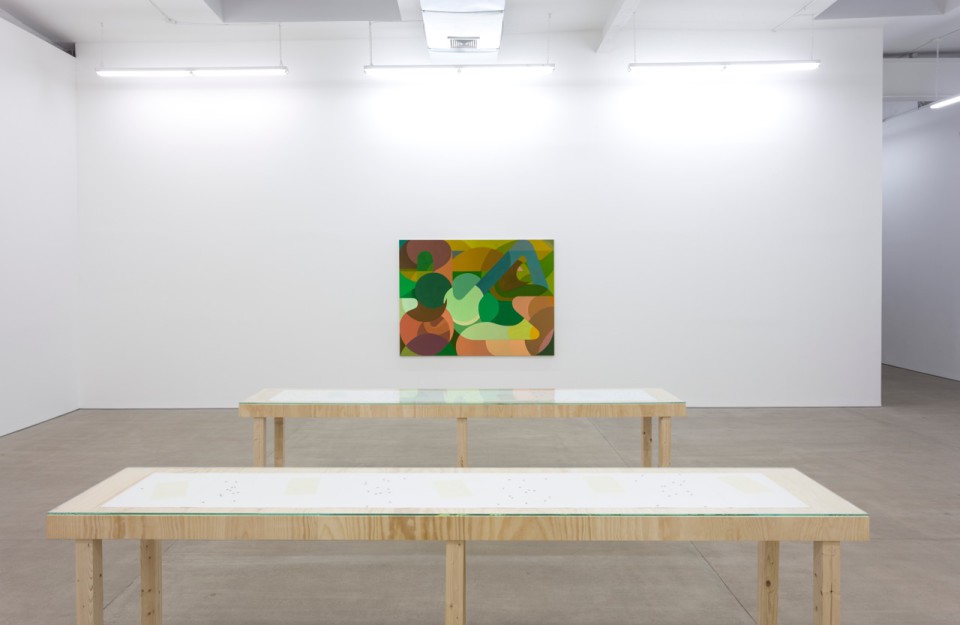 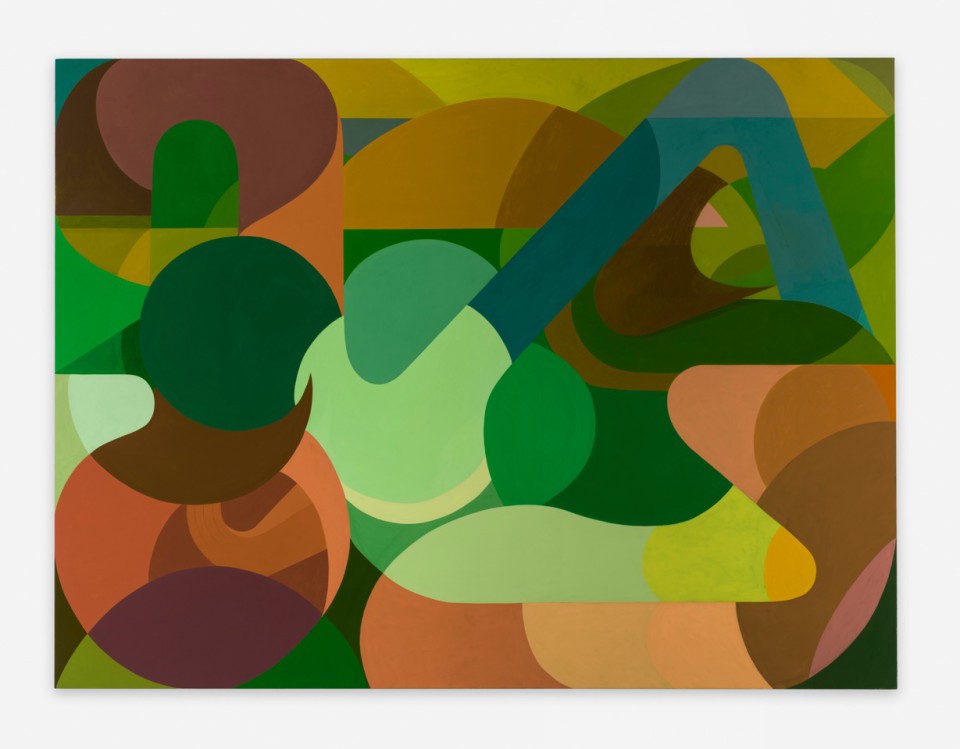 Stamford Connecticut. What an “m” (eyes). What a shade of brown on that car park beyond the
spotty Amtrak porthole (muzzle, whiskers). How are the local schools I wonder. How are the interrelations
between the local socio-economic spheres? I want to pinch a grape (ears, head)
until it dies or becomes other but they’re telling me the cafe car
just closed. Meanwhile In New York City the quality and price of a pizza slice
(nose) reflects broad- er patterns of wealth distribution (mouth). The middle class slice is dying.,
2015, oil on linen, 63 x 84 inches (160 x 213.4 cm) 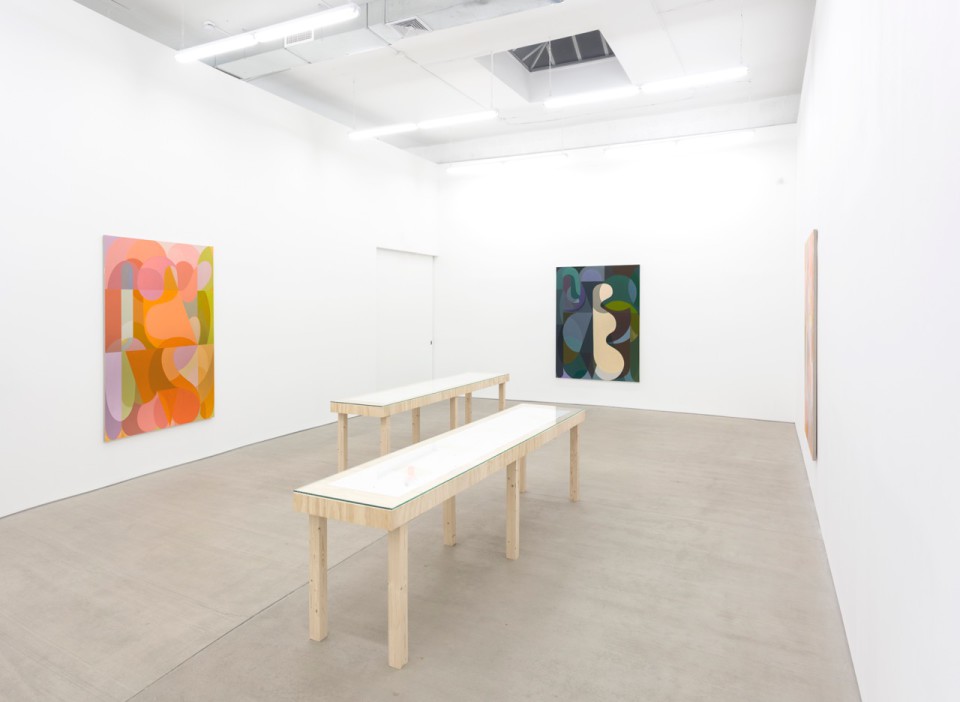 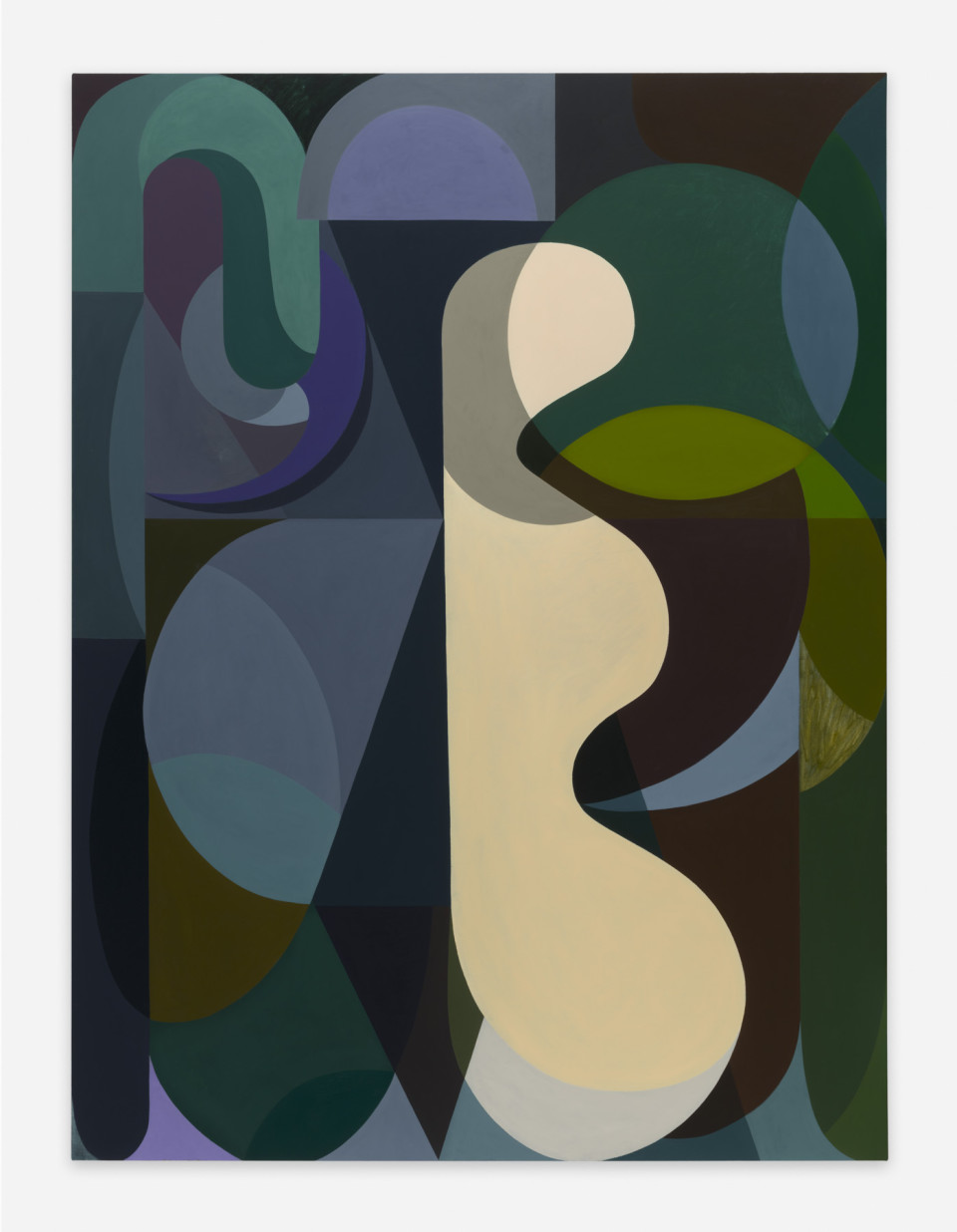 My friend worked as a public defender in Nashville and he told me about the racist judges with
their racist gavels (nose, mouth). He told me how they whacked deep grooves (whiskers) into their
desks which they were mad at for being called benches (muzzles).
I heard about how some innocent twin brothers were convicted in a joint trial.
They got the death penalty and were executed and buried but someone mis- matched their bodies to
their graves (eyes) and so they buffed the names out right then and there (pupils) with
a power sander. Their ancient and unfazed attorney had a king sized belly (head).
As a young Marine he bided his time at the shore of Iwo Jima while the dogs used to ferret out
the fox holes caught the sniffles. They had been standing for too long in the sloshing pontoon hulls.
The future attorney sug- gested they use condoms (ears) to keep the dog’s feet dry.
It worked! The Americans spilled onto the shores and onward to victory.,
2015, oil on linen, 84 x 63 inches (213.4 x 160 cm) 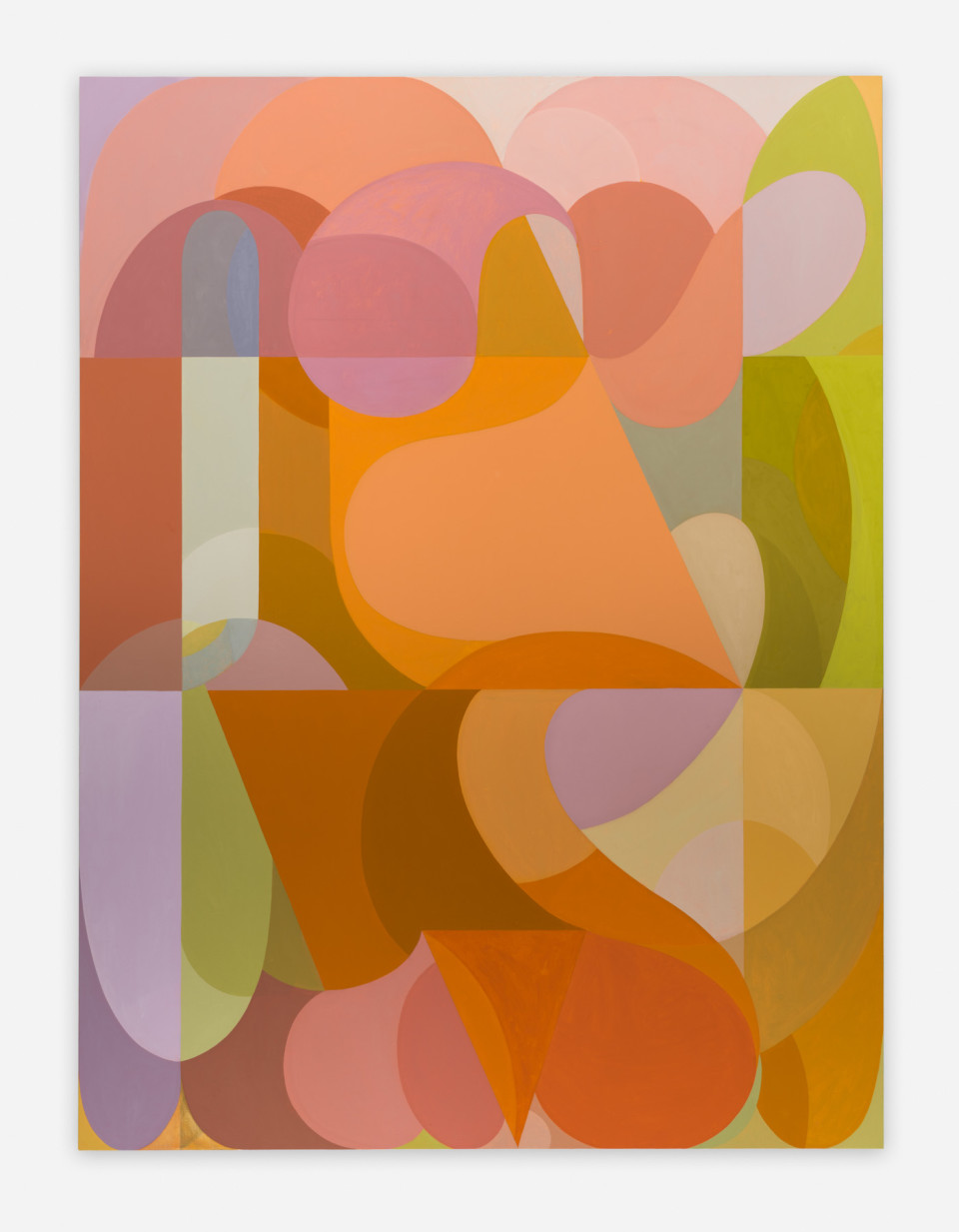 I seen a flower once with all the petals blowed off by the wind except for two (muzzle, eyes).
There was a big cruel horsefly on each weighing them down (pupils).
In the middle of the flower was an old bumble bee (nose, mouth) doing his thing in the pollen (whiskers).
When he was finished with his rounds he went back to his hive (head) and did a jig for the queen.
I don’t know what the flies did though. There’s so much I don’t know!
My excuse is I had to run home to take some sheets off the line (ears) before the rain came.,
2015, oil on linen, 84 x 63 inches (213.4 x 160 cm) 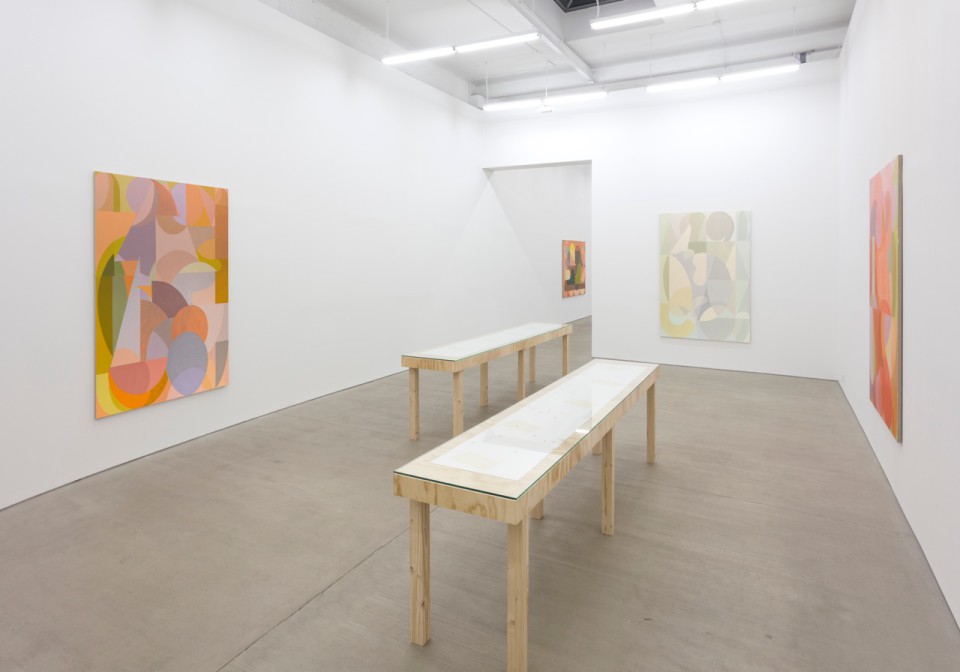 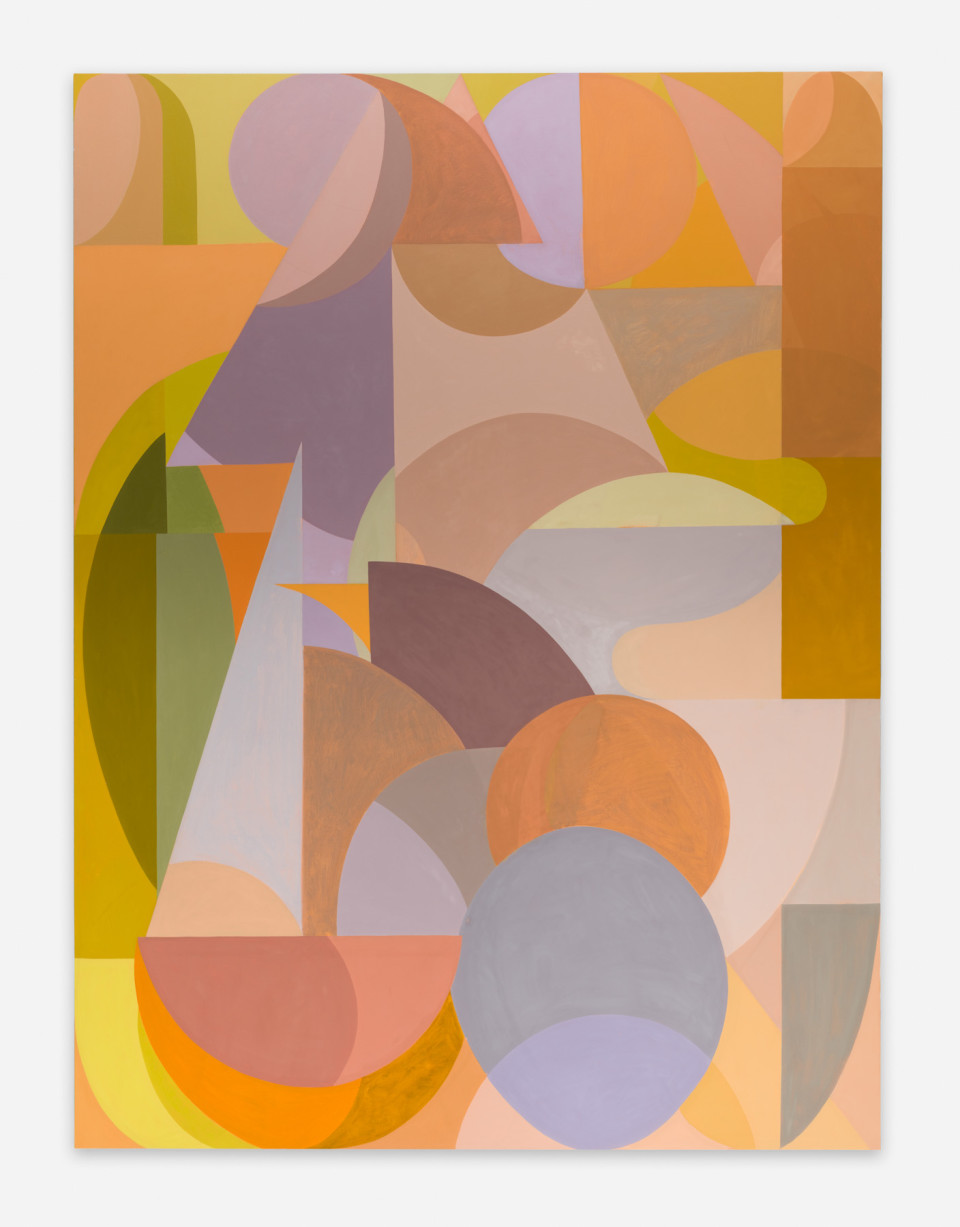 The gist in descending scale: the sun (head) then mars (muzzle) and then little mother earth (nose).
Mars is covered in craters (whiskers). The earth is covered in antennae (mouth) and satellite
dishes (eyes) which are themselves covered in the soot (pupils) of the cities they’ve been sitting on.
The sun isn’t covered in anything, it’s just heat and glory; a crooked lense bending life into wiggles (ears).,
2015, oil on linen, 84 x 63 inches (213.4 x 160 cm) 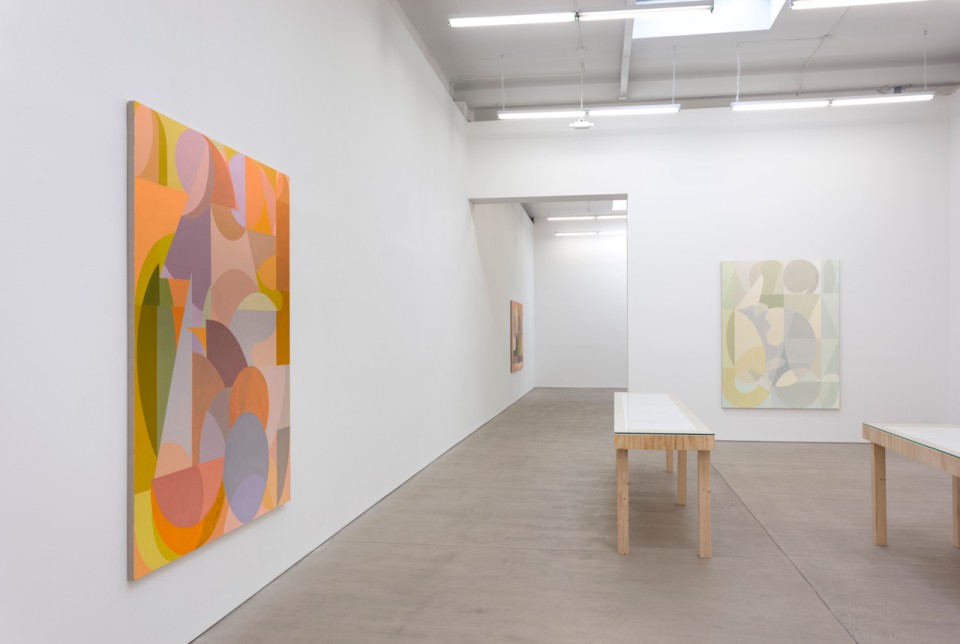 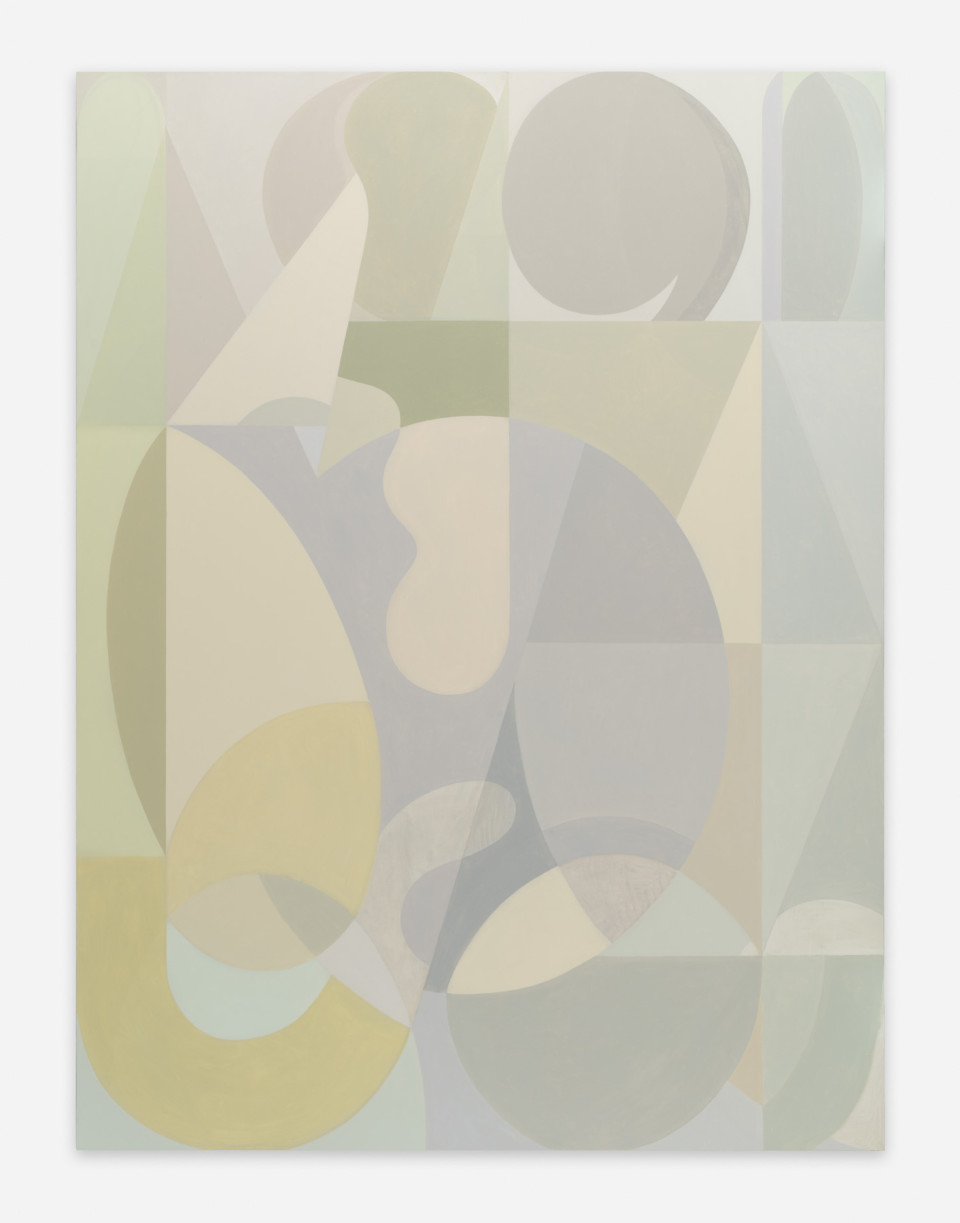 I saw some pink twenty inch rims with breast cancer ribbons on them. (muzzle, nose, mouth)
They were shiny and really seemed to sum things up.
Two people were sitting behind the car’s tinted windshield. (eyes, pupils)
I couldn’t make out their eyes, but for politics sake let’s say they were looking at the adjacent construction site,
at a condo building’s concrete skeleton (head) shrouded in orange safety netting.(ears).,
2015, oil on linen, 84 x 63 inches (213.4 x 160 cm) 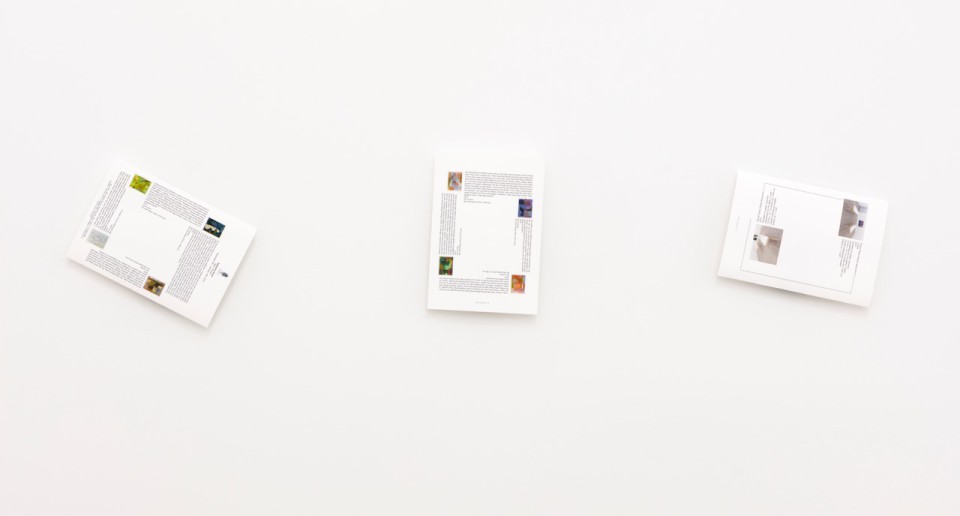 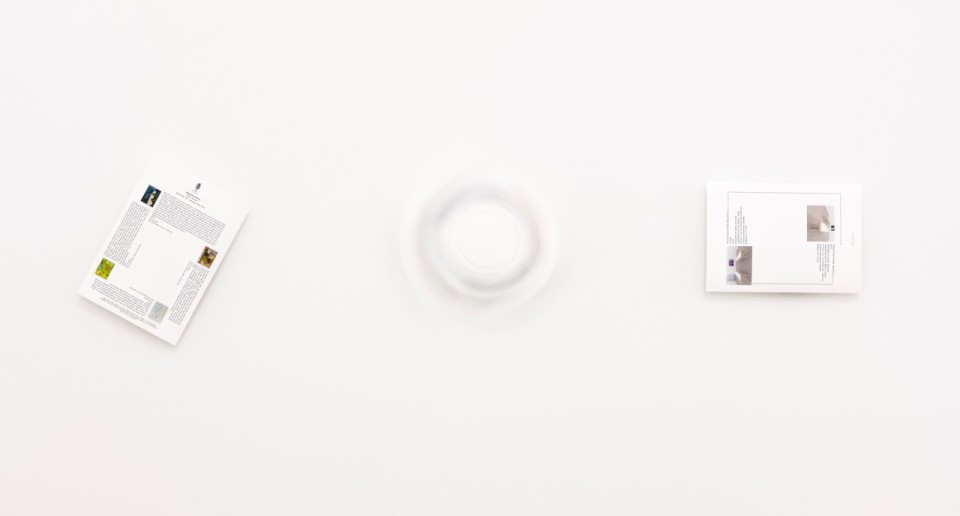